The equity markets are finally seeing action that has even the most hardened bulls running scared. In the past, I’ve been quick to dismiss selling periods – Cycle Lows – as natural regression-to-the-mean events. In a bull market, an oscillating Cycle pattern of two steps forward and one step back is what drives an asset higher. But this time is different…two steps back is completely out of character. So much so, that I now believe that the 3.5 years bull market is now in serious trouble.

If we were to look for reasons to explain the recent selling, there are plenty to be had. The most likely is not a specific piece of news or single data point, but that the collective herd of market participants is fickle and can be easily spooked. The current bull market has broken plenty of records, including the length of time – more than 3 years – since a 10% correction. This has resulted in double-digit market gains for consecutive years, and a near vertical rise over a sustained period of time. Against the backdrop of a soft world economy, this performance is nothing short of remarkable.

What are potentially playing out are the very beginnings of a market turn. We could soon experience an environment of reversing psychology, where all tidbits of news will be construed as negative for the markets. It takes a lot of confidence (and ignorance) to elevate and sustain a market at present levels, especially one built on blind faith and the idea that the FED can keep the market elevated into perpetuity. This has bred a level of speculation, and arrogance, often seen at the top of longer dated Cycles.

If we need a catalyst for a potential market sell-off, we need only look toward Europe. Although the EU is just one market in the inter-connected global economy, it still makes up almost 25% of world GDP. And it’s large enough that any issues will send shock waves through world markets.

The EU’s problems are structural in nature, with too much government red tape, inefficient and constrictive regulations, and a labor policy that is not consistent with a rapidly-changing world economy. In addition, EU leaders have made poor choices of late. In particular was the instance on excessive austerity at precisely the wrong time in the Business Cycle. Austerity is choking what little life remains in the European economy, and is consuming capital needed to support investment and growth initiatives. The time to pay down debts and reign in spending is during good times; doing so gives the flexibility to loosen the reins and deficit spend during bad times.

What’s developing in Europe is a negative economic feedback loop comprised of declining sales, lower production, declining income and lower employment. This is compounded by a general lack of leadership across the continent, and a flawed, unworkable economic union. The northern countries have been somewhat sheltered up to this point, primarily because the single currency has been very advantageous to them versus the consumption-focused economies in the South. In addition, France has faltered recently and has now made it clear that it cannot adhere to a capped budget while the economy shrinks.

Technically, the stock market is often months ahead of the general economy when it comes to predicting economic recession. Although the German market is near all-time highs, a failed cycle has developed. This is very likely associated with a market that has topped. On the below weekly chart, the first sign of a top was the Cycle failure in August. The market’s inability to rally to new highs in September was a failed opportunity to negate the August Cycle failure. But the nail in the coffin for German equities was Friday’s plunge, which took the index below the August lows and created another failed Cycle. Multiple failed cycles are exactly how markets top and turn over. 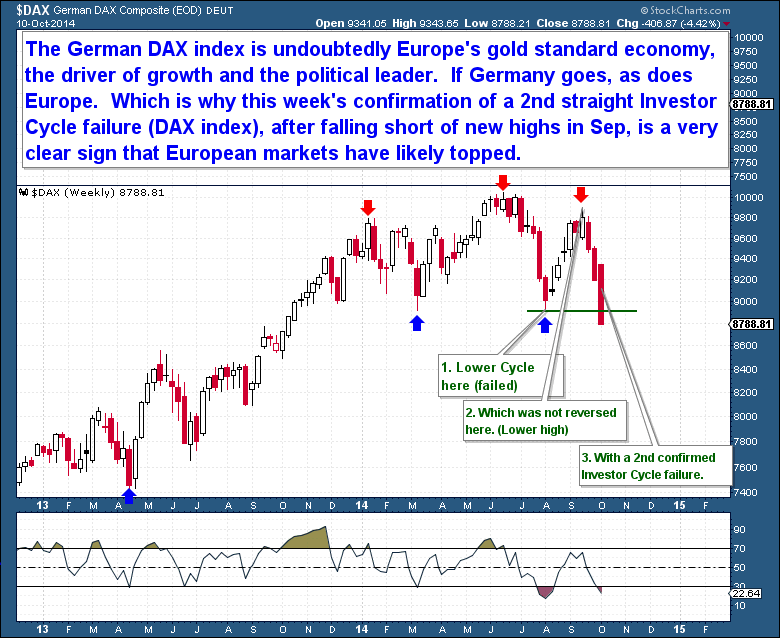 Here in the US, Equity Cycles are also showing similar technical damage. Technically, the great bull market is still intact, and a short-term rally is more than overdue.  But to see this 1st Daily Cycle (normally the most bullish Cycle) retrace more than 100% into a failed state, is very odd behavior. A Cycle failure with increased volatility can only be seen as a significant change in character for the bull market, which is why I’m very concerned that the 3 year bull run is coming to an end. With other markets such as the DAX and Russell also showing Cycle failures, we need to strongly consider the possibility that a Left Translated Investor Cycle is in development. 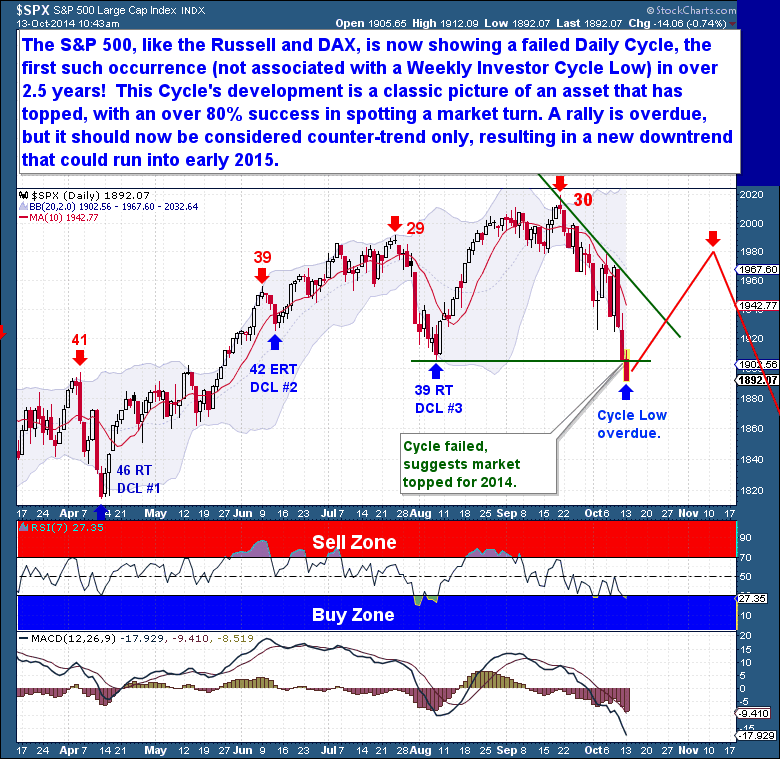 I’m trying to balance bearish evidence (that is suddenly very evident) with what remains a bull market of historic proportions. In 2013 and 2014, the bull market needed to be respected, but was clearly on borrowed time. Because the bull market was not based on fundamentals, and with the market extremely extended, once the market tops, a correction is likely to occur within a very short period of time.

Because the S&P has retraced more than 100% of the Daily Cycle, within the first Daily Cycle, we now have a confirmed Cycle failure on the Weekly chart too.  This is likely to be confirmation that the Investor Cycle has topped and 3 long months of declines are ahead for world markets. Of course, it’s never a straight move down, the market is significantly oversold here, so the expectation will be for a rally back toward the 50dma (the 1,975 area).  Such a rally would occur as part of the 2nd Daily Cycle, but that rally should fail to make new highs since the market failed to hold the August lows at 1,904 next. 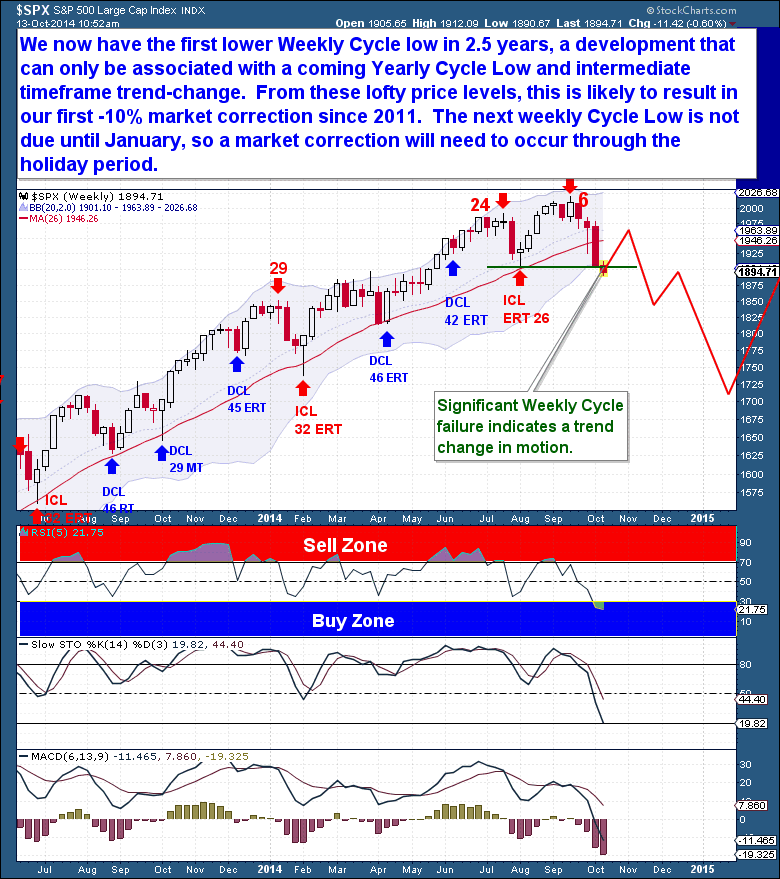 The primary reason for my bearishness is that Cycle failures in all of the major indices (NASDAQ, Russell, S&P and DAX) are leading indicators of a broader market top. And with that evidence in mind, the below monthly chart of the S&P is confirming that divergences are likely a prelude to a move lower into a Yearly Cycle Low. But to be clear, this isn’t a call on the health of the bull market that began in 2009. Even a market correction (-10%) in the coming months will not be enough (at this point) to alter my view of the bull.

On the below monthly chart, the S&P has fallen below a very well-defined 36 month rising wedge. Losing a channel of this size, along with the Cycle failures, are signs of real market trouble. The breakdown in the technical indicators is also indicating that this is the beginning of a multi-month decline.  An Investor Cycle failure is always a prerequisite for a Yearly Cycle top, and a week 6 Investor Cycle top (see chart above) fits well with how Yearly Cycles normally come to an end. A week 6 top also allows for at least 12 more weeks before this Investor Cycle concludes, meaning we’re likely to experience a fast, step-down process lower into the next Weekly and Yearly Cycle Lows in early 2015. 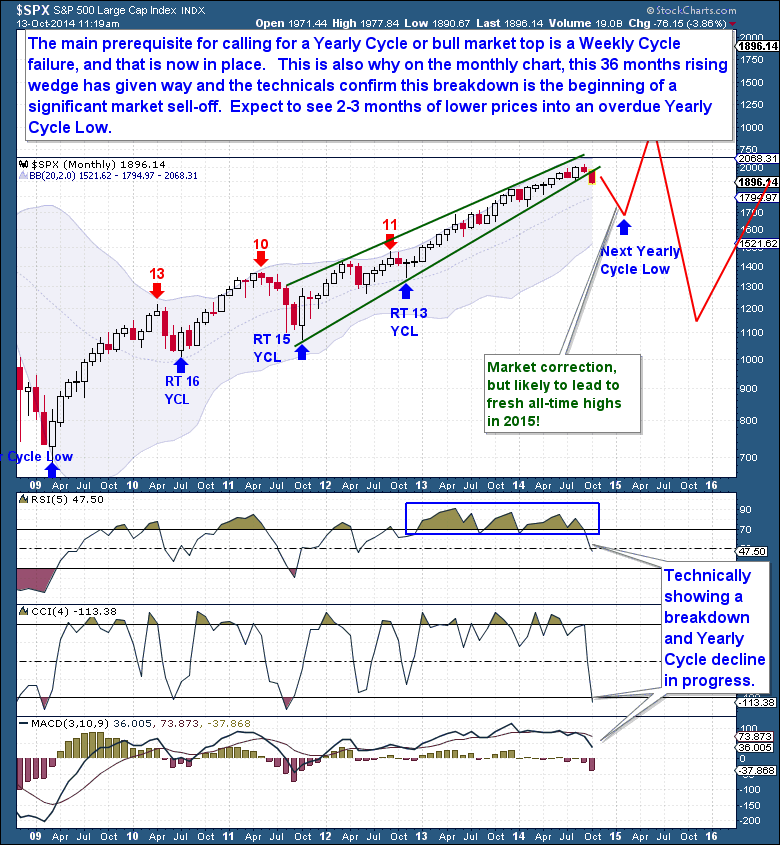 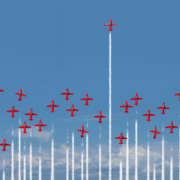 Forgot to Buy the Dip