It suddenly seems as though the good times in equities might be ending. Though my perspective is based only on “gut feel”, there seems to be an underlying level of fear that has crept into the markets. If so, it’s a real problem for equities. Any market trading at all-time highs and with a valuation far above historical averages requires a continued level of irrational excitement and speculative ignorance to remain sustainable. And fear is not consistent with irrational, speculative ignorance.

When equities price in Risk, it can happen quickly, and I believe the markets are in the early stages of doing just that. Though equities don’t want to believe that significant downside is possible, crashes in commodity prices and massive demand for high quality debt are harbingers of significant declines ahead. In my opinion, the early stages of an equity market decline are unfolding, and it’s only a matter of time before it erupts into a serious event.

Macroeconomic measures don’t always correlate directly with equity market performance, at least not in the immediate term. But when economic numbers begin to look as ugly as they are at present, I can assure you that an overheated and extended market will stand up and take notice.   Of particular note this week are several ominous signs:

In quoting the above statistics, I’m mindful of the fact there are always both negative and positive points that an analyst can use to support a point of view. In this case, though, I honestly feel that the severity and depth of current macroeconomic developments are well outside of the norm. The extreme movements in many markets are interrelated, and seem to be a reflection of a rapidly deteriorating economic landscape.

These shifts are showing up as weakness in equity markets. As days tick by, and as the Daily Cycle Low (DCL) draws closer, the S&P has continued to knock against lower support areas. Throughout the past 3 year bull advance, at this point in the Cycle the S&P has pushed higher to new all-time highs. So the current position – bumping against support – is definitely a change in character, one that is telling us that the market may be exhausted. In my opinion, it is also telling us that 2015 is going to be a difficult period for markets. The current Daily Cycle (DC) has not failed yet, but it’s sitting near the lows, and at this point, that’s a very ominous development. 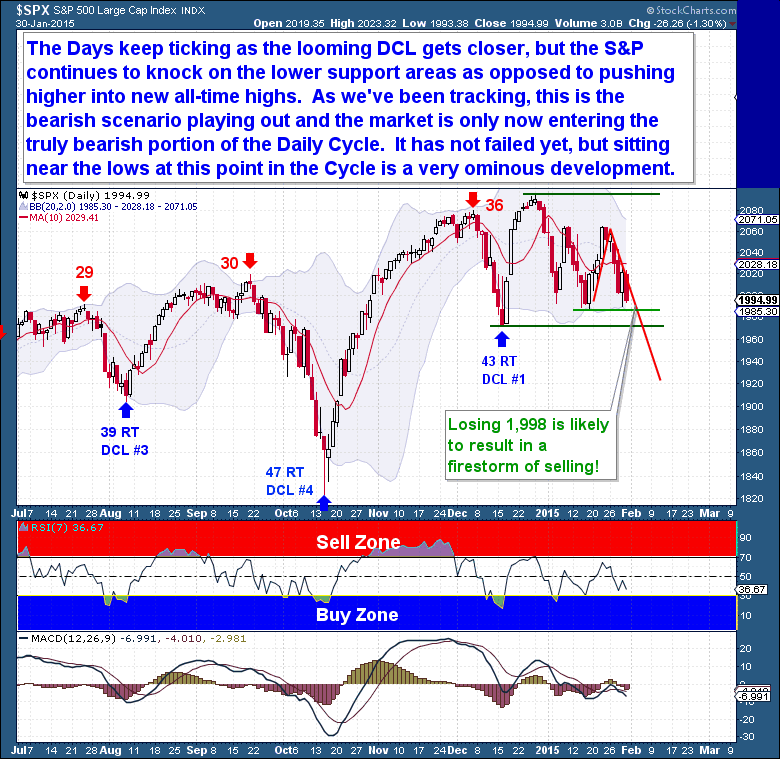 From a Cycle standpoint, the equity markets are still showing higher highs and higher lows. So, following strict Cycle discipline, I could make the argument that the bull market is alive and well. And for this reason, we are forced to show it some respect. But the most surprising development from here would be for equities to roar higher. Such a move would catch many (yet again) by surprise, but I think it’s unlikely this time.

The bull market has had its time, and the bears look like they will finally have a chance to control the action. With the 2nd DC looking ready to roll-over, and with numerous tests of the 26 week moving average in play, the market’s change in character appears ready to play out in prices.

Severe downward pressure is obviously building, and at a point in the Investor Cycle (IC) where a continuing bull market should see us pushing to new highs. The technical indicators confirm that this is an Investor Cycle in its declining phase, and it would be very rare to have the Cycle suddenly change course at this point. 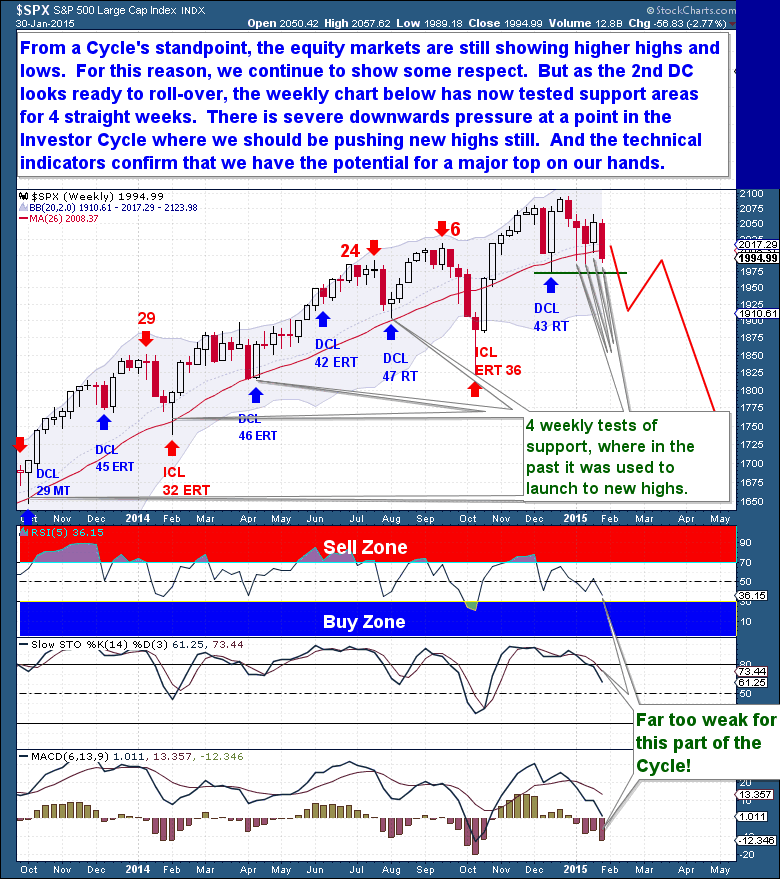 Recent developments are, perhaps, most apparent on a monthly chart. With January’s close, for the first time since the up-move began in 2011, we have a monthly candle that is entirely below the massive bull market channel. This alone is fairly strong evidence to support the idea that the market has topped.

The technical indicators paint a similar picture. The monthly RSI is showing diverging weakness, while the first negative monthly MACD cross since the 19%, 2011 decline is a serious warning sign.   When we combine the negative technical indicators and macro-economic weakness with recent Daily Cycle struggles, and then consider them in the context of an overextended cyclical bull market, there’s compelling evidence that the market is on the verge of a major decline.

If the current Daily Cycle fails in the coming weeks, it will set off a domino effect of cascading Cycle failures. A DC failure would almost certainly result in an IC failure with a move below 1,816. This would be, at a minimum, a deep Yearly Cycle decline by the early spring. From there, how deep equities might fall is really anybody’s guess. 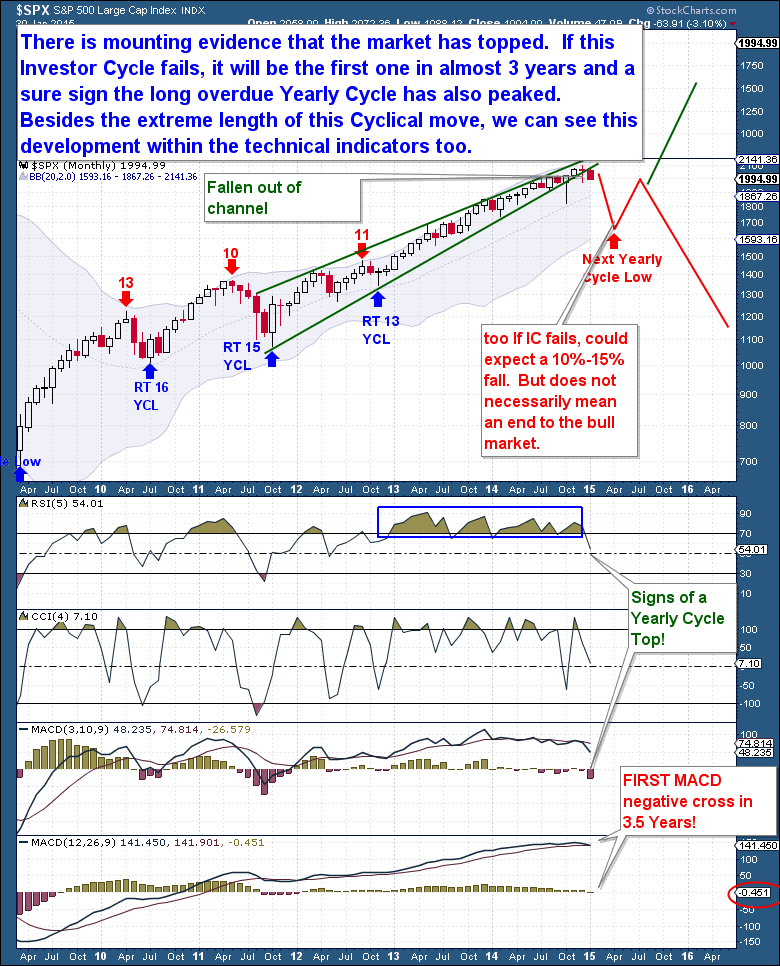 An update to the Jan 15th post “A Cycle Test for Equity Markets” https://thefinancialtap.com/public/a-cycle-test-for-equity-markets

Until the ECB announcement of €1 trillion in QE, the equity markets were struggling to maintain their upside, near-vertical trajectory. The equity market Cycles seemed to have recently changed in character, and were at serious risk of rolling over and failing. And a failure at this point in the Investor Cycle, after such a massive and speculative bull market, would open the door to a significant decline and possibly even signal that the current great bull market was finally over.

But the ECB changed the game. It stepped on to the track and cleanly took the QE baton from the FED. At €60 billion per month until September 2016, the stimulus is massive, and we can’t discount the possibility that it will drive world markets higher until then. Since similarly-sized FED QE programs were credited with driving world equity markets higher, I see no reason why the ECB’s action will have a different outcome.

But, as stated many times before, eventually fundamentals always matter. And in this case, the action by the ECB, although significant, may be too late. With bond yields across Europe dipping into negative territory, my fear is that Europe may be already locked into a powerful deflationary cycle that is impossible to exit.

This idea brings us to the current Daily Cycle, and the importance of the “test” for equities that I’ve outlined recently. I made it clear last week that, regardless of the long term Cycle implications, I expected a rally in equities. And that’s what we got. The market has risen to the 2,060 area, the most likely point for a change in long term trend to present itself. The current DC is on Day 27, but the market has yet to exceed the high set on Day 8. If the market is topping, its current position is exactly where I would expect the rally to stall and fail as price turns lower.

So, this is it! I believe the longer term trend is coming down to the action over a handful of days! If, on the back of a €1 trillion QE program, the market cannot rally 45 points to a new all-time high, there is nothing that can save it. And if the market turns lower from here, it will print a Left Translated Daily Cycle (DC), and is likely to face a terrible and rapid sell-off. As I’ve been saying for some weeks, it’s up to the bulls to prove they want to keep the current rally alive. 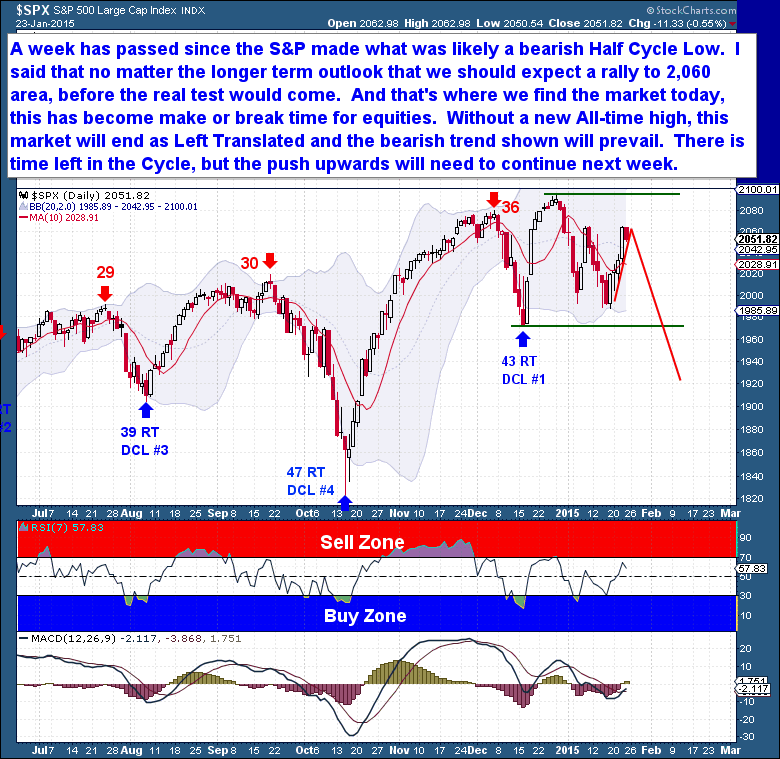 I believe that all the important moves will present themselves on the Daily Chart – the weekly chart (below) offers no additional insight. If we see a new all-time high in the coming weeks, it will negate the recent bearish behavior and open the possibility of another 200-300 point rally.

The weakness in the 2nd DC is evident on the weekly chart, with the market repeatedly testing the 26 week moving average support. In the past price would typically just bounce off the 26 wma and move higher, but this time the 26 wma is acting as resistance that could potentially give way. If the market fails to make new ATH’s, we will point to the current developments as evidence that the market was topping.

It should not be lost on anyone that this is the same analysis I presented in the Gold Cycle, but on the other side of the equation. The trend for equities is up, so we should expect a continuation. But as with Gold, there’s a lot of evidence that suggests that the long term trend might be changing. More importantly, we should see the potential for long term Gold and equity market trend changes as symbiotic. Equity market weakness and Gold relative strength are inextricably linked. 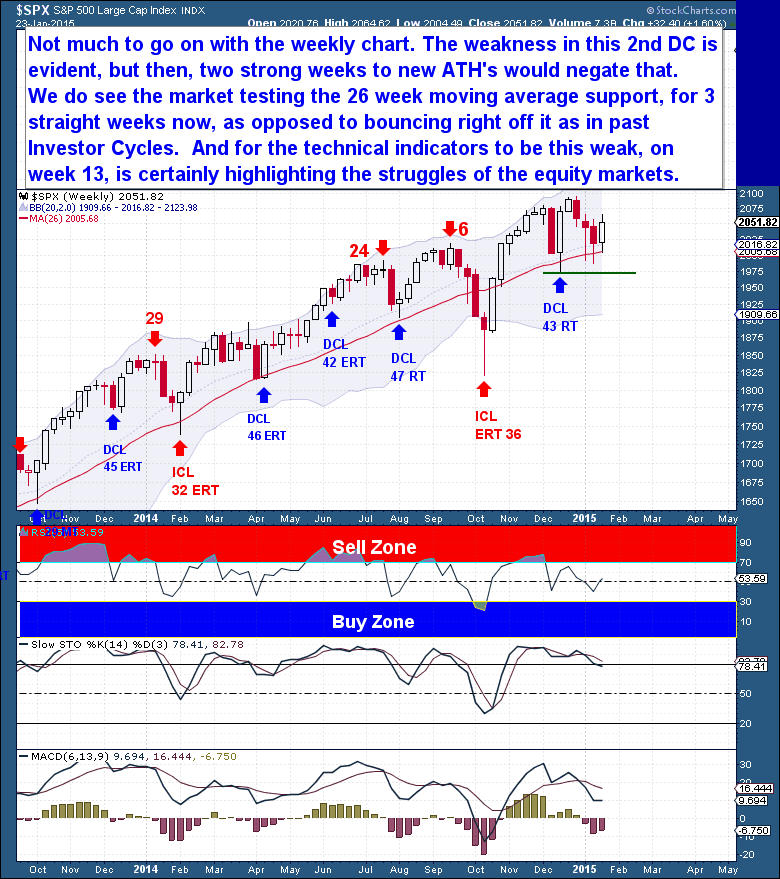